My dog was diagnosed with anaplasmosis? What is it?

What are the clinical signs of anaplasmosis?

Infection with the more common form of anaplasmosis, A. phagocytophilum, often causes lameness, joint pain, fever, lethargy, and not eating (inappetance). Most infected dogs will have symptoms for 1 to 7 days; however, some will have no or only minor symptoms. Less common clinical signs include vomiting, diarrhea, coughing, and labored breathing. Rarely, neurological signs such as seizures have been reported.

Infection with A. platys can cause cyclic thrombocytopenia, a condition in which there is a periodic decrease in platelets (circulating cells that help in the blood clotting process). Clinical disease is often mild, but some dogs may develop bruising or bleeding (including nosebleeds), especially during the early stages of infection when platelet counts may be at their lowest.

Dogs with anaplasmosis often have many of the same symptoms as those with Lyme disease, and infection with both agents (co-infection) is not uncommon. Both Lyme disease and anaplasmosis are commonly found in the same geographic location and are transmitted by the same tick species.

How is anaplasmosis diagnosed?

Several types of tests, including enzyme-linked immunosorbent assay (ELISA), indirect fluorescent antibody (IFA), and polymerase chain reaction (PCR), are available to help your veterinarian diagnose anaplasmosis. In addition, the organism can sometimes be seen through a microscope during peak phases of infection.

Your veterinarian will determine which diagnostic protocol is best for your dog.

Some of these tests can be performed at your veterinary hospital; others may require sending a blood sample to a 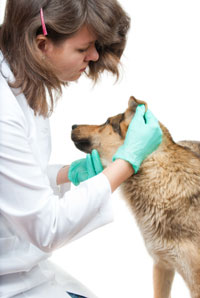 commercial veterinary laboratory. Your veterinarian will discuss the various test options and determine which diagnostic protocol is best for your dog’s condition.

How is it treated, and what is the prognosis?

The treatment for canine anaplasmosis is the same as that for other closely related tickborne infections including ehrlichiosis and Lyme disease: the antibiotic doxycycline. Many infected dogs are treated for 30 days. In the majority of cases, symptoms improve rapidly. Dogs are often markedly better 24 to 48 hours after therapy is begun, and the prognosis for clinical recovery is excellent.

The prognosis for clinical recovery is excellent.

Although most dogs clinically improve, it may be difficult to determine whether or not a dog is no longer infected. If a dog stops producing antibodies to the organism, this may indicate that the organism has been cleared from the body. Even if a dog that has been infected with anaplasmosis is treated and returned to normal, the dog may continue to test positive for the infection on subsequent blood tests. However, this doesn’t mean that the dog has an active infection, and a second round of antibiotic therapy to try to obtain a negative blood test is generally not recommended.

What if my dog tested positive but isn’t sick?

Dogs from areas where anaplasmosis or Lyme disease are common have often been exposed to A. phagocytophilum and have a positive antibody test result. In fact, one study demonstrated that approximately 40% or more of dogs in these areas may be seropositive (have a positive test result). However, it appears that many dogs may have antibodies to A. phagocytophilum without having any evidence of clinical disease. It has been shown that clinically healthy dogs may have persistent infection with A. phagocytophilum and are chronically infected carriers of the organism. We do not know if these dogs will eventually become ill or not.

Current research suggests that canine anaplasmosis is an acute disease that occurs in dogs a week or two after infection through a tick bite. Because chronic infection has not been directly related to clinical disease and because a therapeutic regimen effective in clearing the organism from an infected animal has not been established, treating clinically healthy, seropositive animals is of questionable benefit and not generally recommended at this time.

A positive test result in a clinically healthy dog should not be disregarded.

However, a positive test result in a clinically healthy dog should not be disregarded. At a minimum, positive dogs should have an aggressive tick control program implemented to minimize exposure to ticks. It is clear that co-infection with two or more tickborne agents is common and that dogs co-infected with Lyme disease (Borrelia burgdorferi) and A. phagocytophilum are nearly two times more likely to develop clinical disease than dogs infected with either agent alone.

There is also some concern that chronically infected carrier dogs could be adversely affected by medications that compromise the immune system (such as steroids) or by an illness that might diminish a dog’s immune status.

Can I get anaplasmosis from my dog?

A. phagocytophilum is considered a zoonotic pathogen. This means it has the potential to infect humans. However, direct transmission from animals to people or animal to animal is highly unlikely and has not been documented.

If a dog is diagnosed with anaplasmosis, strict tick control measures should be taken.

If a dog is diagnosed with anaplasmosis, this indicates there are infected ticks in the environment that could transmit the disease to humans, and strict tick control measures should be taken.

© Copyright 2012 LifeLearn Inc. Used and/or modified with permission under license.