What is diabetes mellitus? 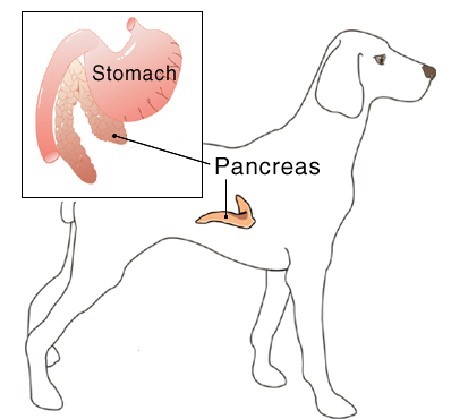 Diabetes mellitus is a disease of the pancreas, a small but vital organ located near the stomach. The pancreas has two significant types of cells. One group of cells produces the enzymes necessary for proper digestion. The other group, called beta cells, produces the hormone insulin. Insulin regulates the level of glucose (sugar) in the bloodstream and controls the delivery of glucose to the tissues of the body. In simple terms, diabetes mellitus is caused by the failure of the pancreas to regulate blood sugar.

The clinical signs of diabetes mellitus are related to elevated concentrations of blood glucose and the inability of the body to use glucose as an energy source.

What are the clinical signs of diabetes and why do they occur?

Glucose is a vital substance that provides much of the energy needed by cells, but it must first be absorbed by the cells. Insulin attaches to receptors on the surface of cells and opens "pores" in the cell wall that allow glucose molecules to leave the bloodstream and enter the cell's interior. Without an adequate amount of insulin to "open the door," glucose is unable to get into the cells, so it accumulates in the blood, setting in motion a series of events that result in diabetes mellitus.

"When there isn't enough insulin,
the cells of the body become starved
for their promary source of energy - glucose."

When there isn't enough insulin, the cells of the body become starved for their primary source of energy – glucose. In response to this apparent starvation, the body starts breaking down stores of fat and protein for energy, causing weight loss. The apparent starvation stimulates hunger and the dog eats more, resulting in weight loss in a dog with a ravenous appetite. The body tries to eliminate the excess glucose by excreting it in the urine. Since glucose attracts water, it promotes loss of bodily fluids into the urine, resulting in the production of a large amount of urine. To avoid dehydration, the dog drinks more and more water.

Some people with diabetes take insulin by injection, and others take oral medication. Is this true for dogs?

In humans, there are two types of diabetes mellitus. In both types there is a failure to regulate blood sugar, but the basic mechanisms of disease differ between the two.

In type II diabetes mellitus (sometimes called non-insulin-dependent diabetes mellitus), some insulin-producing cells remain, but the amount of insulin produced is insufficient, there is a delayed response in secreting it, or the tissues of the dog's body are relatively insulin resistant. Type II diabetes may occur in older obese dogs. People with this form can often be treated with an oral drug that stimulates the remaining functional cells to produce or release insulin in an adequate amount to normalize blood sugar. Unfortunately, dogs do not respond well to these oral medications and usually need some insulin to control their disease.

How is diabetes mellitus diagnosed? 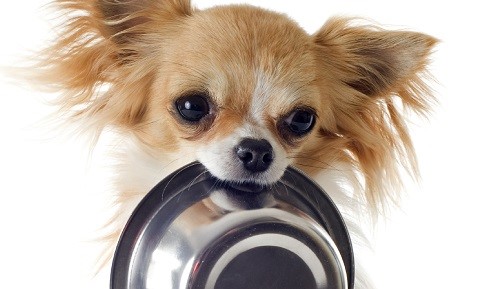 To conserve glucose within the body, the kidneys do not filter glucose out of the blood stream into the urine until an excessive level is reached. This means that dogs with normal blood glucose levels will not have glucose in the urine. Diabetic dogs, however, have excessive amounts of glucose in the blood, so it spills into the urine. Once blood glucose reaches 180 mg/dl, the excess is removed by the kidneys and enters the urine. This is why dogs and people with diabetes mellitus have sugar in their urine (glucosuria) when their insulin levels are low.

How is diabetes mellitus treated in dogs? Is treatment expensive?

Dogs with diabetes mellitus generally require two insulin injections each day, and nutrition is an important component of disease management. In general, they must be fed the same food in the same amount on the same schedule every day. Although a dog can go a day or so without insulin without a crisis, this should not be a regular occurrence. Treatment must be looked upon as part of the dog's daily routine. This means that you, as the dog's owner, must make both a financial and personal commitment to treat your dog. If you must be out of town or go on vacation, your dog must receive proper treatment while you are away. Once your dog is well regulated, the treatment and maintenance costs are reasonable. The special diet, insulin, and syringes are not overly expensive, but the financial commitment may be significant during the initial regulation process or if complications arise.

Initially, your dog may be hospitalized for a few days to deal with any immediate crisis and to begin insulin regulation. One example of an "immediate crisis" is a dog that is so sick it has quit eating and drinking for several days. Dogs in this state, called diabetic ketoacidosis, may require several days of hospitalization with intensive care. Otherwise, the initial hospitalization may be only for a day or two while the dog's initial response to insulin injections is evaluated. At that point, your dog returns home for you to administer medication. During the initial phase of insulin therapy, regular return visits are required to monitor progress. New technology has allowed the adoption of home glucose monitoring with the use of a simple device. Additional home monitoring can involve the evaluation of urine for the presence of glucose, although this is not a very sensitive way to monitor glucose levels. It may take a month or more to achieve good insulin regulation.

The financial commitment may again be significant if complications arise. Your veterinarian will work with you to try to achieve consistent diabetes regulation, but some dogs are difficult to regulate. It is important to pay close attention to all instructions related to administering medication, nutrition, and home monitoring. One serious complication that can arise is hypoglycemia, or low blood sugar, which can be fatal. This may occur due to inconsistencies in treatment.

What is the prognosis for a dog with diabetes mellitus?

Once canine diabetes mellitus is properly regulated, the dog's prognosis is good as long as treatment and monitoring are consistent. Most dogs with controlled diabetes live a good quality of life with few symptoms of disease.