What do my cat's kidneys do?

The kidneys have many functions. They principally act to remove metabolic waste products from the blood stream, regulate the levels of certain essential nutrients such potassium and sodium, conserve water and produce urine.

What is chronic renal failure?

"Damage to the kidneys has been occurring over a number of months or years (chronic) before failure is evident." 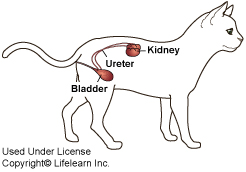 The kidneys have a large amount of spare capacity to perform their various functions so at least two-thirds (67% to 70%) of the kidneys must be dysfunctional before any clinical signs are seen. In many cases, this means that the damage to the kidneys has been occurring over a number of months or years (chronic) before failure is evident. Chronic renal failure (CRF) is mainly a problem in older cats. Only about 10% of the cases occur in cats less than three years old.

What are the clinical signs of chronic kidney failure?

Early signs of disease such as weight loss and poor coat quality are often dismissed as normal aging changes. In the initial stages of kidney failure, the kidneys cope with their inability to efficiently remove waste products by excreting them at a lower concentration over a larger volume (in other words, by producing a larger amount of more dilute urine). This is known as compensated renal failure. After approximately two-thirds of the kidney tissues have failed, there is a rapid rise in waste products in the bloodstream and an apparent sudden onset of severe disease.

What are the causes of CRF?

CRF is the end stage of a number of different disease processes rather than a specific disease in its own right. Diseases or conditions that can eventually lead to CRF include:

1.  Congenital malformations of the kidneys - such as polycystic kidney disease in long haired cats

3.  Glomerulonephritis - inflammation and damage to the kidney's filtration membrane

4.  Neoplasia - various tumors of the kidney, most commonly lymphosarcoma

5.  Amyloidosis - this is the build-up of an unusual protein in the kidney that prevents the kidney from functioning normally

How is the disease diagnosed?

Renal disease is usually diagnosed by looking at the level of two biochemical byproducts in the bloodstream, blood urea nitrogen

(BUN) and creatinine, in conjunction with the urine specific gravity (USpG). Microalbuminuria (or the presence of small protein molecules in the urine) is another indicator of CRF. Tests to measure the blood levels of other substances such as proteins, potassium, phosphorus and calcium as well as the red and white blood cell counts are important in order to determine the extent of failure and the best course of treatment.

Could the renal failure have been diagnosed earlier?

"Neither clinical signs of renal failure nor rises in BUN and creatinine are evident until significant loss of kidney function has occurred."

Unfortunately, the early diagnosis of chronic renal failure is very difficult. Neither clinical signs of renal failure nor rises in BUN and creatinine are evident until significant loss of kidney function has occurred. In earlier stages of disease, there are no clinical signs to indicate that renal function tests, which can pick up early renal damage, are required. Therefore, we recommend that all senior pets have at least a urinalysis performed every six to twelve months to diagnose kidney disease at it earliest detectable stage. A low urine specific gravity or an increase in protein levels in the urine may indicate that the kidneys are not functioning optimally.

How does CRF affect my cat?

Because the kidneys perform a variety of different functions, the clinical signs of renal failure can be somewhat variable. The most common changes seen are weight loss, poor hair quality, halitosis (bad breath), variable appetite which may be associated with mouth ulcers, lethargy and depression. Less common signs include increased drinking or urinating, vomiting, diarrhea, and anemia.

What treatments are available?

The treatment of CRF depends on the results of blood tests, and specific treatments are aimed at resolving specific abnormalities. Don't worry if the list below seems so long that you will never be able to administer all of the medications. The majority of cats are effectively managed with diet change including supplementation and one or two other treatments.

"It is important that fresh water is available at all times because cats with renal failure can dehydrate rapidly."

What is the cost of treatment?

Treatment costs will vary with each individual case. In the majority of cases, long-term management is relatively inexpensive.

How long can I expect my cat to live?

Unfortunately, once the kidneys are damaged, they have very limited ability to recover. However, with proper management, most CRF cases progress very slowly. With treatment, your cat may have several years of good quality, active life ahead.