Epilepsy is a medical term derived from the Greek word epilepsia which means seizure or "falling sickness." It is a brain disorder characterized by recurrent seizures in the absence of any known cause or abnormal brain lesion. In other words, the brain appears to be normal but functions abnormally.

The cause of epilepsy is unknown. It may be related to a biochemical or neurochemical abnormality. It is thought to be genetic in many breeds although the exact mechanism of transmission is unknown. Breeds that have a higher incidence of epilepsy include beagles, shepherds, border collies, boxers, cocker spaniels, collies, dachshunds, golden retrievers, Irish setters, keeshonds, Labrador retrievers, French poodles, St. Bernards, Shetland sheepdogs, Siberian huskies, springer spaniels, Welsh corgis, and wire-haired fox terriers. Epilepsy is somewhat common in dogs and rare in cats.

What are the clinical signs of epilepsy?

Seizures are one of the most alarming events that you may ever witness. They are often characterized by stiffening of the neck and legs, stumbling and falling over, uncontrollable chewing, paddling of the limbs, loss of bladder control and violent shaking and trembling. Afterwards, the pet may appear confused, dazed or sleepy. Seizures can last a few seconds to a few minutes. It is estimated that up to two percent of all dogs will have a seizure in their lifetime.

1.  Aura - This is the period before the seizure and is characterized by the pet appearing overly anxious. The pupils often dilate widely. This phase generally lasts less than one minute. Pets seem to 'sense' they are about to seizure.

2.  Seizure - Each attack may be different and can range from a mild muscle spasm to a severe convulsion with defecation and urination. Loss of consciousness may or may not occur.

3.  Post-ictal - This is the period immediately following the seizure and is characterized by confusion, weakness and rapid breathing. The severity of this phase depends on the severity of the seizure. Temporary blindness and total exhaustion may follow a severe episode.

How is epilepsy diagnosed?

Epilepsy is a "diagnosis of exclusion"; the diagnosis of epilepsy is made only after all other causes of seizures have been ruled out. A thorough medical history and physical examination are performed, followed by diagnostic testing which includes blood and urine tests and radiographs. Additional tests such as bile acids, cerebrospinal fluid (CSF) analysis, computed tomography (CT) or magnetic resonance imaging (MRI) may be recommended, depending on results of the initial tests.

What is the treatment of epilepsy? 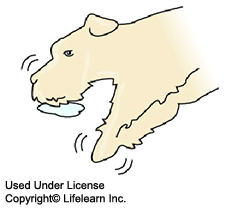 There are various anticonvulsants that may be recommended for your pet once it has been diagnosed with epilepsy.  Anticonvulsants are very potent medications, and treatment must be continued for the remainder of the pet's life.

"The risk and severity of future seizures may be worsened by stopping and re-starting anticonvulsant drugs."

The risk and severity of future seizures may be worsened by stopping and re-starting anticonvulsant drugs. Therefore, anticonvulsant treatment is only prescribed if one of the following criteria is met:

Phenobarbital is one of the more common anti-seizure medications used in dogs, and usually it must be administered twice daily.  Drug dependency will occur with this medication. Irregular dosing schedules (including starting and then stopping the medication, or forgetting to give pills so that blood levels fluctuate widely) may predispose your pet to more frequent or more violent seizures.  Dose ranges vary dramatically from patient to patient.

When your pet is first put onto this drug, blood samples to measure phenobarbital levels will be taken every two to four weeks until the most appropriate dosage is determined. Once the therapeutic dose for your pet is determined, phenobarbital blood levels and liver function tests will need to be monitored  at least every six months to ensure that your pet's blood levels stay within the therapeutic range (i.e. that they do not get dangerously high or low), and that the  no damage to the liver is occurring. In the event that phenobarbital blood levels get too high, liver failure can develop, which may lead to death. If the levels are too low, violent seizures may occur. Additional drugs such as potassium bromide or newer human anti-seizure medications may be used in difficult cases. Your veterinarian will determine the proper treatment plan for your pet's condition.

What is the prognosis for a pet with epilepsy?

Most dogs do well on anti-seizure medication and are able to resume a normal lifestyle. Some patients continue to experience periodic "break-through" seizures. Many dogs require periodic adjustment of their medication dosage, and some require the addition of other medications over time.