What is a luxating patella?

"The term luxating means "out of place" or "dislocated"."

The knee joint connects the femur, or thighbone, and the tibia, or shinbone. The patella, or "kneecap," is normally located in a groove called the trochlear groove, found at the end of the femur. The term luxating means "out of place" or "dislocated". Therefore, a luxating patella is a kneecap that 'pops out' or moves out of its normal location.

What causes a patellar luxation? 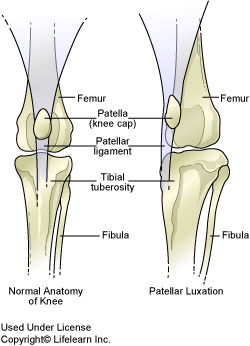 The patella will luxate or slip out of the groove during extension of the leg if the trochlear groove is too shallow, if the cat is bow-legged or cow-hocked (i.e., the leg bones are excessively curved) or if the point of attachment on the tibia is off-center. Most of the time in cats, the patella luxates because the trochlear groove is too shallow, and the direction of luxation is towards the inside of the leg, and is called 'medial luxation'.  Although any breed of cat can be afflicted with a patellar luxation, there may be a genetic predisposition to this problem in Devon Rex and Abyssinian cats. In some cases, patellar luxation may occur because of trauma to the bones or muscles of the hind leg.

What are the symptoms of patellar luxation?

The symptoms of patellar luxation include intermittent lameness, an unusual 'skipping' on the affected leg when the cat walks or runs, or difficulty in jumping. The lameness is what is called a 'mechanical lameness', meaning that the cat is lame because the displaced kneecap is causing abnormal pull on the bones of the leg, mechanically preventing the cat from walking properly. With a medial luxation, the lower part of the leg will usually be held out to the side as long as the kneecap is out of place. When it returns to its normal position, the cat will be able to resume normal walking. Many cats that have this condition learn how to kick the leg to the side, which causes the knee to hyperextend and snaps the patella back into place. Over time, the soft tissues around the joint become damaged and/or stretched and it becomes easier for the kneecap to pop out of place.

How is a patellar luxation diagnosed? 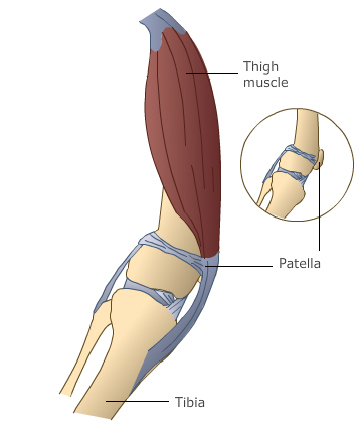 Does a luxating patella cause any long-term problems for my cat?

This depends upon the grade of the luxation and whether both legs are affected to the same degree. The higher the grade, the more likely the cat will develop long term problems. Some cats, especially with Grade I patellar luxation, can tolerate this condition for many years, even for their entire life. With advancing age, arthritic changes very often take place in the joint due to the abnormal movements and stress, resulting in pain or decreased mobility. Once arthritis develops, it cannot be reversed. In addition, patellar luxation predisposes the knee to other injuries, especially torn cruciate ligaments.

Can a luxating patella be corrected?

A luxating patella can be corrected surgically, especially if the patella luxates frequently. With mild Grade I luxation, surgery may not be necessary. For most cats with patellar luxation, surgery is recommended sooner rather than later to minimize the likelihood that arthritis will develop. The higher the grade of luxation, the sooner the surgery should be performed. There are several different surgical techniques that are used to repair a luxating patella, but all of them involve deepening of the trochlear groove so that the patella stays in place and tightening of the joint capsule and soft tissues that surround the joint to provide additional stability. If the point of attachment of the patellar ligament on the tibia is displaced, this will also be corrected.

If your veterinarian performs surgery before arthritis or other knee injury occurs, the prognosis is excellent. Your cat should regain full use of its leg. However, if arthritis has already developed in the knee joint, your cat may experience intermittent pain in the leg and the arthritis may progress. Prescription medications, joint supplements or special therapeutic joint diets may slow the progression of arthritis and help control any discomfort.

© Copyright 2010 Lifelearn Inc. Used and/or modified with permission under license.