What is vestibular disease?

"Vestibular disease refers to a sudden, non-progressive disturbance of balance."

What are the clinical signs of vestibular disease? 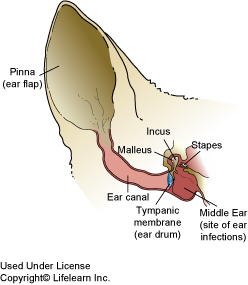 Most dogs present with the sudden onset of loss of balance, disorientation, head tilt and irregular jerking eye movements called nystagmus. Many dogs will become reluctant to stand or walk. Most dogs will lean or fall in the direction of their head tilt.

Causes of vestibular disease include middle or inner ear infections, drugs that are toxic to the ear, trauma or injury, tumors and hypothyroidism. When no specific diagnosis is found, the condition will be called idiopathic vestibular syndrome. These cases are distinguished by the sudden onset of clinical signs and the subsequent rapid improvement with little, if any, medical intervention.

How is vestibular disease diagnosed?

Diagnosis is based on medical history, clinical signs, and the results of blood and urine tests. In some cases, diagnostic testing will include radiographs of the head to assess the appearance of the middle and inner ears and the tympanic bullae. Occasionally, magnetic resonance imaging (MRI) or computed tomography (CT) scans will be performed to look for tumors or other abnormalities. Brainstem auditory evoked response (BAER) testing may also be performed in some patients.

The criteria for diagnosing canine idiopathic vestibular syndrome are:

3.  No detectable cause - no signs of outer- or middle-ear infection, ototoxicity, trauma, hypothyroidism, rickettsial disease, etc.

How is vestibular disease treated?

Treatment is directed at the underlying cause, if one can be identified. In severe cases, supportive therapy such as intravenous fluids and hospitalization may be required until the pet can eat and walk on its own. If the pet is seriously disoriented or ataxic (stumbling, unable to stand or walk), it may be given sedatives to help it relax.   Drugs that help combat nausea or motion sickness such as dimenhydrinate may be beneficial. Antibiotics may be used in cases suspected of having middle or inner ear infections. Although corticosteroids have been used in the past, there is little scientific evidence to support their use in this condition.

What is the prognosis for a dog diagnosed with vestibular disease?

"The clinical signs associated with vestibular disease are often most severe during the first twenty-four to forty-eight hours."

The clinical signs associated with vestibular disease are often most severe during the first twenty-four to forty-eight hours. Many pets begin to improve within seventy-two hours. The head tilt and stumbling often improve over a seven to ten day period. Most patients are completely recovered within two to three weeks although some will have residual symptoms such as a head tilt or mild "wobbling" for life. If the patient fails to improve or worsens, then a more severe underlying disorder should be suspected and advanced diagnostic testing should be pursued.