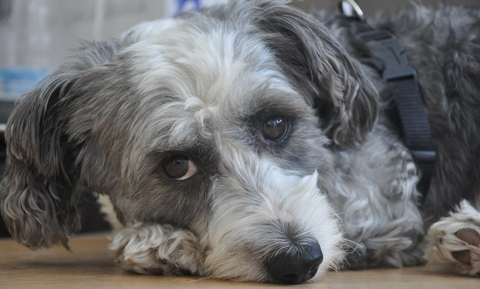 My dog developed diarrhea that comes and goes.  He never seemed to be really sick, but he lost weight despite eating, and he often seemed really tired.  I took him to the veterinarian, and his veterinarian found that he had developed fluid in his abdomen.  After some other tests, she said that he had protein-losing enteropathy.  What does that mean and how is it treated?

The word “enteropathy” means any disease of the intestinal system. Protein-losing enteropathy (PLE) is not a specific disease, but rather describes a group of diseases that cause the loss of proteins from the bloodstream into the gastrointestinal (GI) tract. Primary GI disease, heart disease, and diseases of the lymphatic system can all cause PLE.  When the body is functioning normally, plasma proteins that end up in the GI tract are broken down and re-absorbed by the body. When a disease entity occurs, protein loss may exceed protein manufacturing by the body. This is called “hypoproteinemia.” When hypoproteinemia is severe, fluid may leak from the circulation into the abdomen or out of the tiny blood vessels in the limbs, causing swelling of the legs.

Could my dog’s genetic profile have led to PLE?

While the Soft-coated Wheaten Terrier, the Yorkshire Terrier, the Basenji, and Norwegian Lundehund breeds are over-represented among PLE patients, there has not been any genetic predisposition proven to date.

Diarrhea is one common sign of PLE. The diarrhea may come and go, may be continuous, or may even be the consistency of water. Interestingly enough, some dogs with PLE have normal stools. Dogs with PLE generally have a difficult time holding their weight, and they may become lethargic. It’s not common for dogs with PLE to exhibit vomiting.

Fluid in the abdomen, fluid under the skin on the under-side of the body or in the limbs, difficulty breathing from the pressure of fluid build-up inside the chest cavity, and thickened loops of intestine are also signs of PLE.

What diseases cause PLE?

The lymphatic vessels carry a clear fluid containing white blood cells, called “lymph,” throughout the body.  Lymphatic diseases that can lead to PLE include:

Diseases that directly affect the GI tract and can lead to PLE include:

Diagnosis may depend on a biopsy of the stomach or intestine.

How is PLE treated?

Severe hypoproteinemia may require hospitalization for plasma transfusions or the use of intravenous fluids designed to keep fluid within the vasculature. If the dog has difficulty breathing, it may become necessary for the veterinarian to remove fluid from the chest or abdomen.

© Copyright 2016 LifeLearn Inc. Used and/or modified with permission under license.