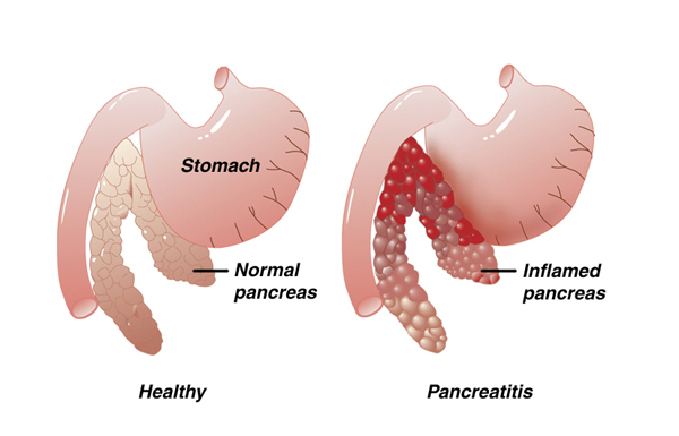 The pancreas is a vital organ that lies on the right side of the abdomen adjacent to the stomach. It produces enzymes to assist in food digestion and hormones such as insulin, which regulates blood sugar or glucose metabolism. When the pancreas becomes inflamed, the condition is called pancreatitis. Pancreatitis occasionally occurs in the cat. There is no age, sex, or breed predisposition for pancreatitis. Acute pancreatitis may take either a mild, edematous form or a more severe, hemorrhagic form. The inflammation associated with acute pancreatitis allows digestive enzymes to spill into the abdominal cavity; this may result in peritonitis and secondary damage to surrounding organs, such as the liver, bile ducts, gall bladder, and intestines. A few cats that recover from an acute episode of pancreatitis may continue to have recurrent bouts of pancreatitis. This is termed chronic pancreatitis.

"Normally, pancreatic enzymes are produced in an inactive state..."

Normally, pancreatic enzymes are produced in an inactive state and travel through the pancreatic duct to the duodenum, part of the small intestine. Once they reach the small intestine, they are activated to begin digestion. With pancreatitis, these enzymes are activated prematurely in the pancreas instead of later in the small intestine. Think of this as a time-release capsule that suddenly bursts before it reaches its intended target; in this case, the pancreatic enzymes begin to digest before they should. These results in digestion of the pancreas itself and, thus, the clinical signs begin. The clinical signs of pancreatitis are often variable, and the intensity of the disease will depend on the extent of organ involvement.

In the cat, pancreatitis appears to occur spontaneously, without any identified trigger or inciting cause.

What are the clinical signs of pancreatitis and how is it diagnosed?

The most common clinical signs include nausea, vomiting, fever, lethargy, abdominal pain, diarrhea and decreased appetite. If the attack is severe, acute shock or death may occur.

How is pancreatitis diagnosed?

"The diagnosis of pancreatitis may be tentative or presumptive in many cases..."

Radiographs may show changes associated with inflammation in the area of the pancreas with severe hemorrhagic pancreatitis. Ultrasound studies may be more helpful by showing inflammation in the pancreas or surrounding area. Unfortunately, many cats with pancreatitis will elude detection with any of these tests. Consequently, the diagnosis of pancreatitis may be tentative or presumptive in many cases, based solely on clinical signs and medical history.

How is pancreatitis treated? 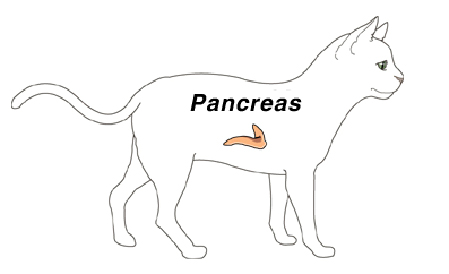 The successful management of pancreatitis will depend on early diagnosis and prompt medical therapy. With mild, edematous pancreatitis, treatment is supportive, by "resting" the pancreas and allowing the body to heal itself.

"Intravenous fluids...and analgesics will be given..."

The only way to "turn off" the pancreas is to withhold all oral fluids and food, so that it is not required to secrete any digestive enzymes that may inadvertently injure itself or surrounding organs further. Intravenous fluids will be given to maintain normal fluid and electrolyte balance, and analgesics will be given to control the intense pain. Many cases will also require anti-inflammatory drugs, or other medication to control vomiting or diarrhea. Antibiotics will be administered if concurrent infection is suspected. Most cats with pancreatitis are hospitalized for two to four days while intravenous fluids and medications are administered and food is gradually re-introduced. With severe hemorrhagic pancreatitis, or if the cat is showing signs of systemic shock,  intensive care is necessary using aggressive doses of intravenous fluids and medications to counteract shock.

What is the prognosis for a cat diagnosed with pancreatitis?

The prognosis depends on the severity of the disease when diagnosed and the response to initial therapy. Cats that present with shock and depression have a very guarded prognosis. Most of the mild forms of acute pancreatitis have a good prognosis with aggressive treatment.

Will there be any long-term problems?

"Most cats recover without any long-term consequences."

Most cats recover without any long-term consequences. However, with severe or recurrent pancreatitis, one or more of the following problems may develop:

If a significant number of cells that produce digestive enzymes are destroyed, a lack of proper food digestion may follow. This is known as exocrine pancreatic insufficiency and can be treated with daily administration of enzyme tablets or powder in the food.

If a significant number of cells that produce insulin are destroyed, diabetes mellitus can result. This can usually be treated with daily injections of insulin.

If the chronic form occurs, there may be repeated bouts of illness that are difficult to diagnose. These cats may have several days of poor appetite, fever, and lethargy. In some cases, diabetes mellitus can ultimately develop.