I have been told that my dog has hip dysplasia, but she isn't lame. Is that diagnosis correct? 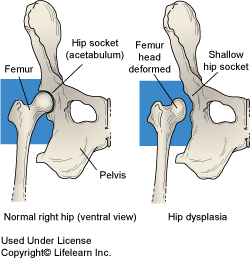 Hip dysplasia is a deformity of the hip that occurs during growth. The hip joint is a "ball and socket" joint. During growth, both the "ball" (the head of the femur or thighbone) and the "socket" in the pelvis (acetabulum) must grow at equal rates.

In hip dysplasia, this uniform growth during puppyhood does not occur. The result is laxity of the joint, followed by degenerative joint disease (DJD) or osteoarthritis (OA), which is the body's attempt to stabilize the loose hip joint.

The degree of lameness that occurs is dependent on the extent of these arthritic changes, and may not be correlated with the appearance of the hip joint on X-rays. Some pets with significant signs of hip dysplasia or osteoarthritis on X-rays may not exhibit any clinical signs, while others with minimal changes may experience severe pain and lameness.

There are two primary causes of hip dysplasia, genetics and diet. The genes involved in hip dysplasia have not been conclusively identified, but it is believed to involve more than one gene. Advances in nutritional research have shown that diet also plays an important role in the development of hip dysplasia. Large breed (generally greater than 50 lbs) puppies should be kept at a normal, lean weight during growth, rather than overfed and encouraged to grow “big.”

Large breed puppies should be
kept at a normal, lean
weight during growth

If it is hereditary, are certain breeds affected more than others?

Yes, although any dog can be affected, it is predominantly seen in larger dogs such as German Shepherds, Saint Bernards, Labrador Retrievers, Golden Retrievers, Old English Sheepdogs, Bulldogs, etc. Large mixed-breed dogs are also at risk for developing hip dysplasia and should be fed a special large breed growth diet the first year.

What symptoms should I look for?

Weakness and pain in the hind legs are the usual clinical signs. The dog appears wobbly and is reluctant to rise from a sitting or lying position. Some dogs will limp or be reluctant to climb stairs. These signs can be seen in puppies as early as a few months old but are most common in dogs one to two years of age. Dogs with mild hip dysplasia on X-rays may develop minimal arthritis without clinical signs until they are older. In fact, although hip dysplasia begins in puppyhood, most dogs don’t develop clinical signs until they are older. It often takes years of gradual bone degeneration until a dog becomes symptomatic.

How is it diagnosed?

What is the treatment? 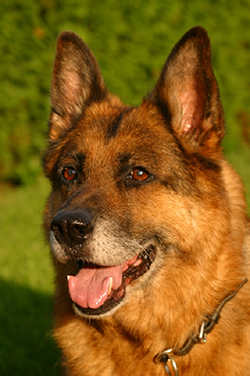 This depends upon the pet's clinical signs and amount of discomfort. There are very effective non-steroidal anti-inflammatory drugs (NSAIDs) that have minimal side effects. The choice of medication is made on an individual basis, and various drugs may be tried before finding the most effective one.

Most dogs with hip dysplasia should receive veterinary-approved glucosamine, chondroitin sulfate, and omega-3 fatty acid nutritional supplements. Many dogs with painful hip dysplasia will benefit from polysulfated glycosaminoglycan injections on a regular basis. Moderate daily exercise, avoiding high impact activities such as jumping, may help keep the patient mobile and strengthen surrounding support structures. Physical therapy has been demonstrated to be highly effective at improving an affected dog’s quality of life and should be part of any treatment regimen. Since excess weight puts undue stress on the hip joints, weight loss is strongly recommended in overweight dogs.

What if NSAIDs don't help?

The alternative to NSAID and medical therapy is surgery. There are several surgical procedures available to treat hip dysplasia. The two most common surgical techniques for hip dysplasia are total hip replacement and femoral head ostectomy (FHO). Other less common surgical procedures used to treat hip dysplasia include triple pelvic osteotomy (TPO), juvenile pubic symphysiodesis, and DARthroplasty. The choice of surgery will be determined by your pet's age, condition, and lifestyle.

What about alternative medicine treatments?

Acupuncture, class 4 laser, stem cell treatments, and traditional Chinese medicine have all been used to treat hip dysplasia with varying results. To date, rigorous scientific studies on these alternative therapies have been sparse, although some are very encouraging in small studies. Talk with your veterinarian about their experiences and recommendations for complementary medical procedures to help your dog.

© Copyright 2015 Lifelearn Inc. Used and/or modified with permission under license.