How common are ear infections in dogs? 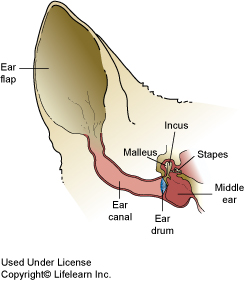 Infection of the external ear canal (outer ear infection) is called otitis externa and is one of the most common types of infections seen in dogs. Some breeds, particularly those with large, floppy or hairy ears like Cocker Spaniels, Miniature Poodles or Old English Sheepdogs, appear to be more prone to ear infections, but ear infections may occur in any breed.

What are the symptoms of an ear infection?

Ear infections are painful. Many dogs will shake their head and scratch their ears trying to relieve the discomfort. The ears often become red and inflamed and develop an offensive odor. A black or yellowish discharge commonly occurs. In chronic cases the ears may appear crusty or thickened and the ear canals often become narrowed (stenotic) due to the chronic inflammation.

Ear mites can cause several of these symptoms, including a black discharge, scratching, and head shaking. However, ear mite infections are more common in puppies and kittens. Adult dogs may occasionally contract ear mites from puppies or cats that are infected. Ear mites create an environment within the ear canal that often leads to a secondary bacterial or yeast (fungal) infection.

Since these symptoms are similar and usually mean an infection, why can't I just get some ear medication?

There are several kinds of bacteria and at least one type of fungus that commonly cause ear infections. Without knowing the specific kind of infection present, we do not know which medication to use. In some cases, the problem is a foreign body, a polyp or a tumor. Treatment with medication alone will not resolve these problems. It is important that your dog be examined to ensure that the eardrum is intact. Administration of certain medications can result in loss of hearing if the eardrum is ruptured. This can only be detected by a thorough ear examination by your veterinarian.

How do you know which drug to use?

First, the ear canal is examined with an otoscope, an instrument that provides magnification and light. This examination allows your veterinarian to determine whether the eardrum is intact and if there is any foreign material in the canal. When a dog is in extreme pain and refuses to allow the examination, it may be necessary to sedate or anesthetize the dog for a thorough examination.

The next step is to examine a sample of the material from the ear canal under a microscope to determine the type of organism causing the infection. Microscopic examination is important in helping the veterinarian choose the right medication to treat the inflamed ear canal. Culture and sensitivity tests are often used in severe or chronic ear infections.

How are ear infections treated?

The results of the otoscopic and microscopic examination usually determine the diagnosis and course of treatment. If there is a foreign body, wax plug or parasite lodged in the ear canal, it will be removed. Some dogs must be sedated for this, or to allow a thorough ear flushing and cleaning. Microscopic study of debris from the ear canal helps determine which drug to use. Many dogs will have more than one type of infection present (e.g., a bacterium and a fungus, or two kinds of bacteria). This situation usually requires the use of multiple medications or a broad-spectrum medication.

"Many dogs with chronic or recurrent ear infections have allergies or low thyroid function (hypothyroidism)."

An important part of the evaluation of the patient is the identification of underlying disease. Many dogs with chronic or recurrent ear infections have allergies or low thyroid function (hypothyroidism). If underlying disease is suspected, it must be diagnosed and treated or the pet will continue to experience chronic ear problems. 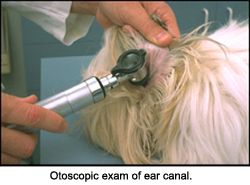 Nearly all ear infections that are properly diagnosed and treated can be successfully managed. However, if an underlying cause remains unidentified and untreated, the outcome will be less favorable. Several recheck examinations may be needed before the outcome is successful.

How important is it to treat an ear infection?

Dogs with ear infections are uncomfortable. Their ears are a source of constant pain and they frequently scratch them and shake their head. This can cause a condition called an "aural hematoma", in which blood vessels in the ear flap break, causing a painful swelling that requires surgical treatment. Deep ear infections can damage or rupture the eardrum, causing an internal ear infection and even permanent hearing loss.

My dog's ear canal is nearly closed. Is that a problem?

Closing of the ear canal is another result of a chronic ear infection. This is known as hyperplasia or stenosis If the ear canal is swollen, it is difficult or impossible for medications to penetrate into the horizontal canal. Anti-inflammatory medications can sometimes shrink the swollen tissues and open the canal in some dogs. Most cases of hyperplasia will eventually require surgery.

What is the goal of ear canal surgery?

There are several surgical procedures that are used to treat this problem. The most commonly performed surgery is called a lateral ear resection. The goal of the surgery is to remove the vertical part of the ear canal and to eliminate the swollen tissue from the horizontal canal. It is relatively easy to remove the vertical canal, but removal of large amounts of tissue from the horizontal canal is more difficult. In some cases, it is necessary to remove the entire ear canal (total ear ablation), which may result in permanent impairment of hearing.

Is there anything I need to know about administering medication in the ear?

"It is important to get the medication into the horizontal part of the ear canal..."

The ear canal may be medicated by following these steps: 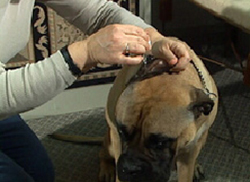 If a second medication is to be used, apply it in the same manner. Typically, you should wait 5-30 minutes before applying additional medications. Be sure to ask your veterinarian for specific directions regarding any ear medication or cleansing agents.

"Do not use cotton tipped applicators to do this, as they tend to push debris back into the vertical ear canal."

When all medications have been applied, clean the outer part of the ear canal and the inside of the earflap with a cotton ball soaked in some of the medication. Do not use cotton tipped applicators to do this, as they tend to push debris back into the vertical ear canal.