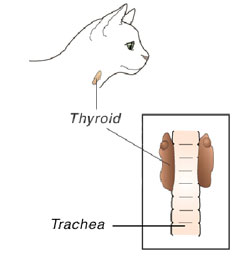 Many organs are affected by hyperthyroidism,  especially the heart.

What are the clinical signs of hyperthyroidism?

The typical cat with hyperthyroidism is middle aged or older – the average age of affected cats is approximately 12 years. Only about 5% of hyperthyroid cats are younger than 10 years of age. 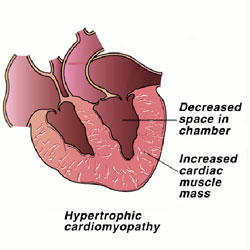 The most common clinical sign of hyperthyroidism is weight loss due to the increased rate of metabolism and despite an increased appetite. Affected cats are often restless, and may become cranky or aggressive. They may have increased water consumption and urination. It is also common for hyperthyroid cats to exhibit increased vocalizing, particularly at night. They may develop periodic vomiting or diarrhea, and fur may appear unkempt. In some cats, anorexia develops as the disease progresses.

Two secondary complications of hyperthyroidism can be significant; Hypertension (high blood pressure) and a particular form of heart disease called thyrotoxic cardiomyopathy. Hypertension develops due to the increased pumping pressure and elevated heart rate that occurs with thyrotoxic cardiomyopathy. About 25% of cats with hyperthyroidism become hypertensive. In some cats, blood pressure can become so high that retinal bleeding or retinal detachment will occur, resulting in sudden blindness.

"Both the cardiomyopathy and the
hypertension are potentially reversible..."

Thyrotoxic cardiomyopathy may develop because the heart enlarges and thickens to meet the increased metabolic demands. In some cases, the cat will develop a heart murmur associated with the cardiomyopathy. Both the cardiomyopathy and the hypertension are potentially reversible with appropriate treatment of the disease. However, unless the retinal detachment is treated immediately, permanent blindness can occur.

The exact cause of hyperthyroidism has not been identified, although the role of dietary iodine continues to be investigated as an influencing factor in susceptible cats.

How is hyperthyroidism diagnosed?

Diagnosis of feline hyperthyroidism is generally straightforward. The first step is to determine the blood level of one of the thyroid hormones, called total thyroxine (or TT4). Usually, the TT4 level is so high that there is no question as to the diagnosis. Occasionally, a cat that is suspected of having hyperthyroidism has a TT4 level within the upper range of normal. When this occurs, a second test, usually either a Free T4 by Equilibrium Dialysis (FT4 by ED) or a T3Suppression Test is performed. If these tests are not diagnostic, a thyroid scan can be performed at a veterinary referral center, or the TT4 can be measured again in a few weeks. 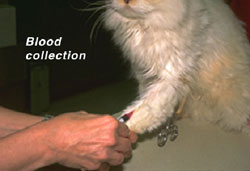 How is hyperthyroidism treated?

Since fewer than 2% of cats with hyperthyroidism have cancerous growths of the thyroid gland, treatment is usually very successful.

Before choosing any form of treatment, several tests are performed which may include blood tests, a urinalysis, chest x-rays, an ECG, and blood pressure measurement. These tests are needed to evaluate the overall health of the cat and to predict the likelihood of complications with the chosen treatment protocol. Cardiac ultrasound or echocardiography may be recommended based on your cat's condition, especially if there is any concern about cardiomyopathy.

"There are four treatment options; any
one of which may be the best
choice for a particular patient."

1.  Surgery. Surgical removal of the affected thyroid gland(s) may be very effective. Since hyperthyroid cats are usually over eight years of age, there is a degree of risk involved. However, if the cat is otherwise healthy and the initial diagnostic tests and treatment did not reveal any underlying conditions, the risk is minimal. If the disease involves both lobes of the thyroid gland, two surgeries may be required, depending on the surgeon's choice of procedures. In many cats, only one thyroid lobe is abnormal, so only one surgery is needed.

If surgery is the chosen treatment method, the anti-thyroid medication methimazole (Tapazole®) may be prescribed for several weeks prior to the operation. During that time, the ravenous appetite should subside, the cat will probably gain weight, and the blood pressure and heart rate should normalize. Methimazole is also given ahead of surgery to determine if the cat has a secondary medical condition such as kidney or liver disease that has been masked by hyperthyroidism. If your cat successfully undergoes the initial treatment without complication, surgery will be performed.

Your cat may be hospitalized for one to two nights following surgery, and should begin to eat and behave normally after returning home. One to two weeks after surgery, another TT4 level is measured.

2. Oral medication. Life-long administration of  methimazole can control the effects of an overactive thyroid gland. It takes several weeks for methimazole to restore thyroid hormone levels to normal. Some cats develop side effects to methimazole, which may include vomiting, lethargy, anorexia, fever, liver damage, anemia and a decrease of white blood cells in the blood.   In some cases, a decrease in blood platelets (thrombocytopenia) may also occur. Since platelets are important for the clotting of blood, thrombocytopenia may lead to problems with excessive bleeding. Because of these rare but serious side effect risks, your cat will need to be closely monitored by having simple blood tests performed every three to six months when using this drug.

Methimazole blocks the production of excess thyroid hormone rather than destroying the abnormal thyroid tissue, so the drug must be given for the remainder of the cat's life. This type of treatment is appropriate for the cat that is a poor surgical risk due to other health problems or is exceptionally old. As stated above, it may also be used for a few weeks to stabilize the cat that is at increased surgical risk because of cardiac complications.

3.  Radioactive iodine. A very effective way to treat hyperthyroidism is with radioactive iodine therapy (I-131). When an injection of radioactive iodine is given, it destroys the abnormal thyroid tissue without endangering other organs. I-131 therapy does not require anasethesia, and it eliminates the need for daily medication. Treatment usually requires one or two weeks of hospitalization at a veterinary hospital licensed to administer radiation therapy.

4.  Prescription nutrition. The most recent development for treating hyperthyroidism in cats is Hills Prescription Diet y/d® Feline. The food is not medicated. Over 10 years of clinical nutrition research revealed that by controlling dietary levels of iodine, the hyperthyroid cat’s body would resume normal thyroid hormone production. This is not an iodine-deficientdiet. Rather, the iodine content is precisely controlled to 0.32 parts per million – a very small amount!

For y/d to work, it must be the only food fed, and this means no cheating with treats! When it is the only food offered, y/d is extremely effective, offering an easy, non-invasive, very affordable way to manage feline hyperthyroidism.

Will my cat be cured with treatment?

What is the prognosis for hyperthyroidism?

Many owners of cats with hyperthyroidism are hesitant to have radiation therapy or surgery because of their cat's advanced age. It is important to remember that old age is not a disease.

"The outcomes following most hyperthyroid
therapies  are usually excellent..."

The outcomes following most hyperthyroid therapies  are usually excellent, and most cats have a very good chance of returning to a normal state of health. Cats managed with diet or medication generally do well as long as their feeding is consistent or their medication is administered routinely and follow-up blood and diagnostic test schedules are performed. 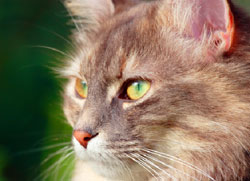 Can hyperthyroidism be prevented?

There are no currently-known preventive measures for hyperthyroidism, but early diagnosis decreases the secondary problems and improves the prognosis. All middle-aged and senior cats should receive a complete physical examination by a veterinarian every six months. Special attention should be given to the thyroid glands, looking for evidence of enlargement and the  clinical signs of hyperthyroidism. Annual blood and urine tests are important in all cats over age six to detect hyperthyroidism before potentially irreversible damage occurs.

© Copyright 2014 LifeLearn Inc. Used and/or modified with permission under license.